A Synopsis on Feelings of Stepmothers

Being a part of a blended family can be a blessing for some families and a living nightmare for others. The role of a stepmother can be challenging and often times incomprehensible by family, friends, and individuals in society. Although there are instances when stepmothers are fortunate to have a relationship with their stepchild(ren) in today’s society, it is a rarity.

When my interviewee fell in love with a divorced man and found out he had children, she had no idea the turn her life was about to take. This stepmother has been married for over thirty years. It was disheartening to hear from the moment she met her stepchildren she would never be accepted by them and all of the hard work and effort would be unappreciated. She made it clear to her stepchildren that she was not the reason for their father’s divorce nor did she want to take the place of their mother. Since she loved her husband and these were his children, she wanted to love them unconditionally.

As she shared her feelings on camera, it became very intense because I could see the stress and emotional strain she endured throughout these years. As she went back down memory lane she shared certain events that occurred with her stepchildren and their family members. There were moments in the interview when she laughed, demonstrated frustration, and even cried due to the pain she endured. When a stepmother loves their stepchildren they too feel the love and pain maternal mothers feel.

Although there were many responses received from viewers who watched the video regarding their personal experiences in being a stepmother, there were very few that were positive. The majority of them expressed that it was not only a strain and stressful on their relationship, but they also felt bad for the children because sometimes the mother speaks negatively of the stepmother and even the father. There were many stepmothers who sympathized with my interviewee because they too had given so much of themselves emotionally that it took a toll on them and their relationship. There were also several stepmothers that ended up getting divorced because they could not handle the excess stress.

A comment posted on Twitter regarding the article I wrote and video I produced Walking A Delicate Line To Love Someone Else’s Children made me realize all the hard work and dedication I have put into researching this topic is appreciated by others.

By using various social media platforms, I had the opportunity to research and read how stepmother’s feel and how they handle certain situations when it comes to interacting with stepchildren. I found many blogs and websites for stepmothers to use as a resource and support.

While using Reddit, I posted the following question. What were some of the risks and rewards to step-parenting? I received an interesting response unlike the other ones posted.

I used Twitter and Facebook to promote my survey for stepmothers to complete and share their personal experiences on being stepmothers. I was very impressed that many individuals actually took the time to complete it. Their feedback is very instrumental to finding the data to support my thesis project. 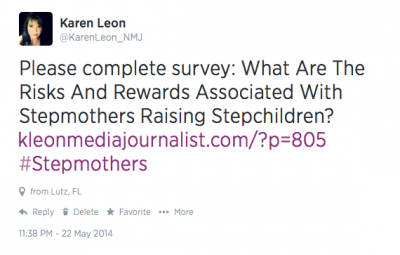 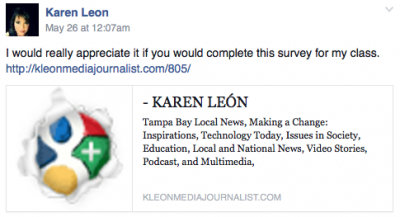 I am currently conducting a survey using Survey Monkey and to date have received thirty responses. 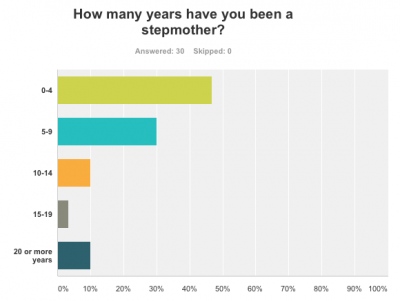 When I first posted my survey and sent the tweet, I did not get many replies. I noticed by posting it again on Facebook, Twitter, and via e-mail I was able to get more people to do the survey. Overall, I continue to analyze the data I am receiving and hope to reach out to more stepmothers and get them involved so they too can complete the survey. The various social media platforms available today are instrumental in disseminating real time information if used properly.

View all posts by Karen León →
What Are The Risks And Rewards Associated With Stepmothers Raising Stepchildren? RPM Ministry Event: GPS To A Joyful Marriage